A Survivor on Why It's Time to Talk

I was a junior in high school when I met him.  You know the guy that turns your head and makes you almost want to drool.  Yeah, that’s right.  Not only was he a senior, one year ahead of me, but he was also a football player, popular with all the girls AND he liked me!  Perhaps it was because I made varsity cheerleading my that year, wore those short little skirts on game day, or I was so darn innocent.  Whatever the reason, he was attracted to me and I to him - so when he asked me out the first time, it was the beginning of a relationship.

Oh, how I wish I could tell you this dating relationship has a fairytale ending, but unfortunately it doesn’t.  Once we started dating he became controlling, manipulating, and mean to me.  Only I didn’t know that then.  In the 1970’s we didn’t have information at school to tell us what teen dating abuse was. Organizations like Break the Cycle didn’t exist.  And because I grew up in a home with an alcoholic father who was verbally abusive to my mother, I just thought it was ‘normal’.  So, I accepted it because after all I did love him...whatever that meant at 17.

It was my junior year that changed my life. We hadn’t dated for long when he snuck into my house one night while my mother and dad were asleep.  Of course I let him in; he was my boyfriend!  Never in my wildest dreams did I think I would be forced to have sex with him...to be silent while he took advantage of me that night. Laying there I wanted to scream because it hurt, because I was being violated, because he was forcing himself on me…I remember tears rolling down my face.  And once he got what he wanted, he was gone and I laid there desperately wanting to cry out for help. But I didn’t. 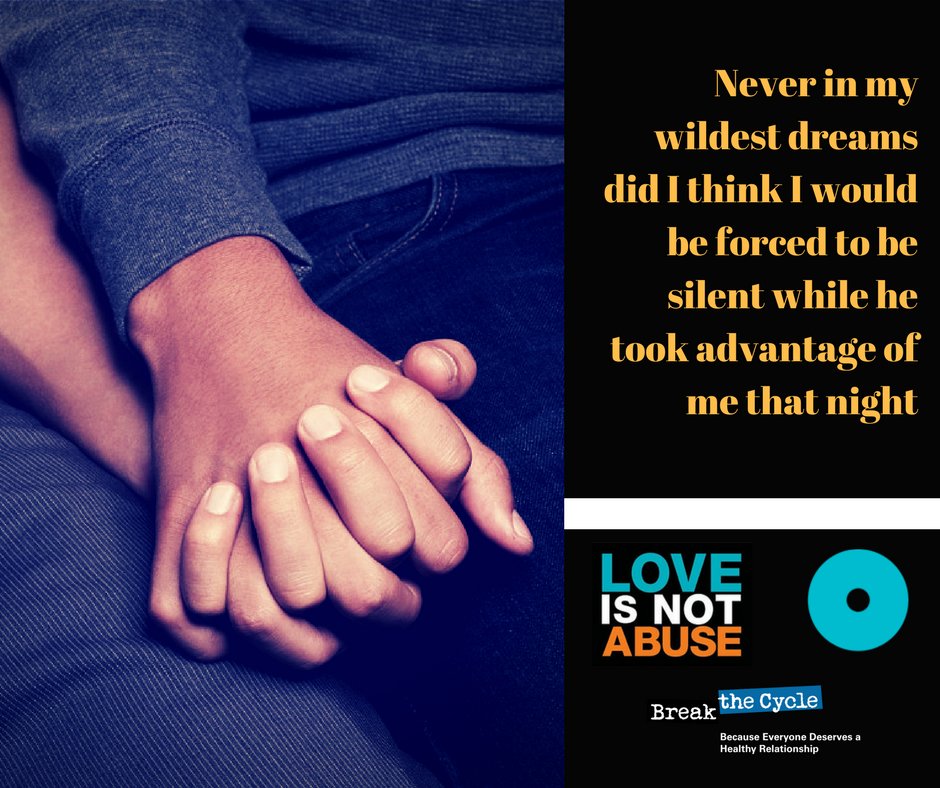 I will never forget that night although it has been many, many years since that time and I have healed.  That night changed me.  It changed me from the innocent young woman I was to one who lost her virginity against her will.  I became silent in my own pain.  I didn’t tell my mother or father because I was so scared and so ashamed.  I didn’t tell my best friend because I was afraid she would tell her parents.  I lived with shame, fear, guilt (as if it were my fault), and low self-worth.   As I finished my junior year, heartbroken, he continued to harass me with mean words and eat away at my self-esteem with words like, “You’re not good enough to go to college, “You’re stupid”, “You’re not pretty”.  The hard part is that I believed the lies.  My senior year I continued to be a cheerleader, active with my class but quiet about my past.  That year I was like a little girl who lost her mother at the shopping mall, wandering around with no hope, no direction, and worst of all, no dreams.  Because the dream of going to college was burst.  I didn’t know who I was or what I was to become.

I’ve often wondered what it would have been like had I had an adult in my life to confide in back then.  But you must realize that we didn’t talk about things like this, and neither did our parents.  It was a different time. Yes, my life would have been different.  I would have pursued my dreams to go to school or be a flight attendant.  I would have known how beautiful of a person I was and that I had a future ahead of me full of passion and full of hope.

My desire for you is that you believe in who you are and that you know you are worthy of love and respect.  Love is NOT abuse.  Love is patient, love is kind, love is not controlling or envious, love does not take advantage of the innocent.  Know what dating abuse is. Parents and caregivers, it may be difficult to broach these subjects with the young people in your life, but it is vitally important to have the conversation.Young people, talk about it with your friends, and find a caring adult you can confide in if you think you are seeing signs of violence.

You are beautifully made to carry out your talents, dreams, ambitions. Don’t let anyone steal that from you.

This post was written by Amanda Graybill: Author, Speaker, Advocate for the Abused , Love Is Not Abuse Coalition member

The Power Of Music: How To Speak To A Girl
5 Steps to Better LGBTQ* Allyship
Mental Health, Sexual Violence, and Thirteen Reasons Why
Engage New Voices: A Challenge to Greek Life
Validating Survivors of Sexual Assault: The 21st Century Edition
Real Stories: My Feminist Hero
Celebrating Women's History Month
Real Stories: Having a Healthy Hookup
Real Stories: This Matters For Guys Too
Setting Boundaries in a Relationship