A Critique of Media Portrayals of Dating Abuse 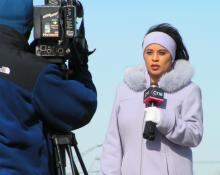 Between Chris Brown, Bill Cosby and the many domestic violence charges against NFL players (and athletes in general), there’s been no shortage of stories in the media about dating abuse. Even in other stories, dating violence has been creeping into conversations unlikely to mention violence. Take for instance President Barack Obama’s video appearance during the Grammy’s urging artists to stop violence against women, or the discussions spurred in response to the recent release of Fifty Shades of Grey. Dating abuse, whether physical, emotional, or otherwise, has clearly - and necessarily - gained a foothold in recent media.

On one hand, these high-profile media stories can be positive because they get us talking about such an important issue. According to Jasmine Ceja, Break the Cycle’s National Youth Organizing Manager, “It's important to reach youth where they are. If [young people’s] focus is on TV shows and celebrity couples it's a great idea to use these relationships - fictional or real - to create a space where teens are more comfortable talking about the behaviors they observe, compared to how this may be affecting them personally.” Stories like Rihanna’s or the recent Switched at Birth episode can be a great starting point for discussion among young people, opening a conversation about the warning signs of abuse and what to do if a young person, or someone they know, is in an unhealthy relationship. One of our Youth Advisory Board members, Melissa Siegel-Barrios, recently discussed the importance of these discussions with Fox.

But when the media sensationalizes dating abuse, or talks about it incorrectly, it limits the effects of awareness building and further entrenches the problem. A 2013 report conducted by the Chicago Justice Project found that within a year of Chicago crime reporting, 198 of the 207 sexual assault cases featured were about stranger rape cases - despite the fact that in 80 percent of sexual assaults cases, the offender is someone known to the victim. This type of reporting is dangerous because it promotes inaccurate assumptions -- commonly referred to as rape myths -- including the premise that sexual assault is most commonly perpetrated by strangers. If a young person doesn’t accurately attribute their experience as an instance of abuse or assault, they may not reach out for needed support, which can lead to very unhealthy outcomes.

The report also highlighted another disturbing trend: the frequency in which we prescribe criminality, or the likelihood of someone to be a criminal, to people of color. The previously cited report states, “Readers of the Chicago Tribune and Sun Times are almost five times more likely to read about a domestic violence incident involving a black offender rather than a white offender.” Additionally, readers were four times as likely to read about a domestic violence story that involved a black offender. These statistics and perceptions are misleading. According to “Race and Punishment: Racial Perceptions of Crime and Support for Punitive Policies,” a report by Dr. Nazgol Ghandnoosh of The Sentencing Project, depictions of crime in the news does not accurately reflect crimes being committed by people of color. Furthermore, The Police Policy Studies Council’s 2001 report, “OFF BALANCE: Youth, Race & Crime in the News” states, “The problem is not the inaccuracy of individual stories, but that the cumulative choices of what is included — or not included — in the news presents the public with a false picture of higher frequency and severity of crime than is actually the case.” The rate in which stories featuring people of color as perpetrators are published does not accurately represent the ratio of offenders of color. Similar to the negative effects that come from over representing cases of “stranger rape,” dangerous and inaccurate assumptions about communities of color can be drawn from media’s overrepresentation of their offenses.

Images in the media affect people’s ideas of what healthy relationships should be, as well as who can have healthy relationships. Rarely do we hear about instances of dating abuse involving female perpetrators, survivors belonging to the LGBTQ or disabled communities, oftentimes making these narratives invisible or mocked as inauthentic. Similarly, the most frequently discussed instances of violence are typically those perpetrated by men of color. Many recognize the stories of Rihanna or Janay Rice, but what about Oksana Grigorieva, Sarah Hyland, Brooke Mueller, and Kim Mathers? These women are equally famous (or their abusers are), but why don’t the names Mel Gibson, Charlie Sheen, or Eminem also act as our go-to example of what a perpetrator of dating abuse looks like? Highlighting the experiences of dating abuse suffered by women of color can still be achieved without hiding the propensity of dating abuse committed by white people.

The media must cover dating violence responsibly. Violence is never the survivor’s fault, is not always physical, and happens within every type of relationship and every community. Additionally, the media must be conscious of the implicit biases that are perpetuated through reporting - whether intentional or unintentional.

By actively attempting to learn more about dating abuse, its warning signs and how to react to those behaviors, the media can effectively change the images we see. This must be done through a critical lens that recognizes, and addresses, the media’s tendency to over represent communities of color as criminal. Those that make that commitment, will be a vital resource in the movement to end dating abuse.

Want to learn more about our commitment to working with the media? See Break the Cycle’s call for journalistic integrity and commitment to collaborate, in relation to stories about survivors of violence.