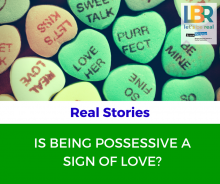 Dating abuse starts even younger than you think, and in teen relationships can be a common occurrence. Many young people perceive a partner's controlling behavior as love or affection, when it is often the first sign of an abusive relationship. My story started in seventh grade when I met Jared* and this is how I learned the answer to the question, "Is being possessive a sign of love?" *Names have been changed to protect the privacy of individuals.

Jared seemed genuinely nice and charmed everyone with his positive vibes and jokes. After a little while of knowing each other, Jared and I became closer and a couple. Our relationship lasted for three years, but I wish it had ended when it began.

In the beginning, our relationship was quite calm and we were always smiling with one another and having a good time. He complimented my personality and acted like a gentleman. He was also on good terms with my best friends, so all seemed well in my eyes. However, as our relationship progressed, I began to see his true colors. The first red flag was his uncontrollable jealousy and anger.

Before I was with Jared, one of my guy friends would always walk with me to pick up my little brother at the elementary school. This guy friend had no romantic interest in me; in fact, he would state how cute Jared and I were as a couple. After Jared found out that he walked me to the elementary school, Jared began calling him vulgar words and even pushed him. When I heard about the incident, I was shocked and repeatedly apologized to my friend. I was angry at Jared and talked to him about his terrible decision making. He apologized to me and sweet talked me into staying in the relationship. I was so infatuated with him that I decided to overlook his flaws and forgive him. Things went well until another incident occurred. During English, our teacher assigned a group project and as usual, I paired up with my girl friends. One of our guy friends was left without a group and asked if he could join us. We gladly agreed and worked on our project at my best friend’s house. Jared noticed the guy friend in our group and became so angry. He texted me every second we worked on the project and called my friend terrible names. My friend just brushed it off and told me my boyfriend shouldn't be treating me or anyone else like this. I agreed, but continued our relationship since I was deeply infatuated with him. Throughout high school, these similar situations occurred as his jealousy became worse. It got to the point where I could not even "like" a fellow classmate's photo or famous celebrities, like Chris Hemsworth, on Instagram . He threw huge fits if I followed a guy on social media that he didn't know about. It soon became apparent that continuing this relationship would only bring more harm.

With the help of my friends, I broke up with Jared and later reflected on what had occurred throughout the relationship. Here are the some of the things I learned:

Even though the media and society tells us that being possessive is a sign of love, it really isn't. You deserve to be in a relationship filled with love and respect!

This blog was contributed by Daniela and Mariana from a SafeBAE chapter.