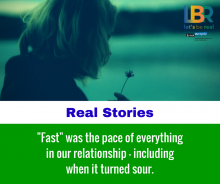 *all names have been changed

“Is this what you want for the rest of your life- to live this way?” Alex* turned to me, as they drove me back to the apartment I had moved into with my two-year boyfriend and self-proclaimed fiancé, to help me pick up essentials. Sticking my hand out the window, I remembered I was not dreaming. This had become my reality - juggling my time between law school in DC during the day and my nightmare at home.

Throughout my relationship with John*, I walked on eggshells, yet I stayed. Many people did not understand; they asked me why, “What had I expected?” The thing is, John was not always bad to me. At the beginning he was wonderful; I fell in love quickly. Fast was the pace of everything in our relationship - including when it turned sour. Caught in a landslide I found myself doing things I normally would not have, making enormous sacrifices. I believed he loved me very much, that we were madly in love. Even so, it was still just under three weeks of cohabitation, during which his behavior escalated and I lost who I was.

For a year and a half, I was regularly told that I, and my goals, were worthless by a person I loved very much. I used a diary as an outlet for my pain from his insults, but I ripped it apart saying, “He knows me best; if he says these things they must be true.” So, we stayed where he wanted; we also stayed together. Constantly deriding my desire to study law, John instead insisted the most important thing for me was to remain close to him. Even though it would have been easier for me to be close to school, that didn’t matter to John; I was to take a daily train AND subway back and forth from law school.

John isolated me from friends and family. He controlled who I saw, where I went, even how long I saw my family; seven days at a time was his strict maximum, although they lived in Canada. He’d keep written track of my daily whereabouts. He’d say nasty things about every single person in my life. He persistently accused me of lying, to the point where I lost track of reality.

One night, I had just returned from DC, two blocks from home outside of Baltimore’s train station, losing my mind and feeling utterly alone. I was averaging one hour of nightly sleep. John’s yelling, threats, shoving me, and object-throwing usually lasted past 3 am, at which point I would lay in bed scared, hoping for rest, before my early train. I was scared, and ashamed, to tell anyone about what went on at home. If he discovered that I had shared details with anyone, he would be very upset with me. I did not wish to see his reaction if I “divulged his private information, sharing his secrets.” I believed “women like me” do not get abused; I was an English and Psychology major. I was 21 years old. Domestic abuse would not– could not– possibly happen to me. I was young, and my major trained me to understand human minds; I would be able to spot warning signs and end it quickly. Never had I been more wrong. I never realized how insidious the nature of intimate partner violence was.

Then one day standing at Penn Station, I realized that things that had been holding me back from leaving - fear, shame, maybe even pride - didn’t matter to me anymore. I wanted help, so when an acquaintance sensed something was wrong, when they took the time to listen and be patient with me, I took the chance to ask for it. And this is what prevented me from losing everything else I valued in my life. When I ran into an acquaintance, Alex, I let it all out. That’s not to say it wasn’t difficult to open up to Alex; John had worked hard to destroy my ability to trust others, with his constant attempts to isolate me. But Alex was patient and kind and I learned people really did want to help me. John was wrong.

Out of kindness, Alex accompanied me to my apartment (despite warnings that my deranged, potentially armed boyfriend might show up anytime, attacking us both) to make it safer for me to get personal belongings out, like my passport. Alex got in touch with my family, and kept track of my whereabouts over the next week, assisting me as I prepared to leave. This is when the real difficulty came.

The first time I tried to leave, I was alone. John trapped me in a corner for several hours and wouldn’t let me phone my family (at this point so worried about my safety they started driving over from Canada) or use the bathroom. After, John staked out our apartment making death threats. I realized I could not move out alone, and so did my family and few remaining friends. The second time I moved out, it was with their help

I am happy now; I have never felt stronger. But I’ve also come to realize, it was people who pulled me out of madness I had been sucked into. It took a few people, and planning and teamwork to ensure everyone’s safety. What I learned and need to share is: Don’t be afraid to reach out for help; there are caring people who want to see you safe. Nobody deserves to go through this alone, nor is it safe. The last thing I want to stress - the realization I had when physically trapped in a corner by John, crying, urgently needing to use a bathroom, but not “allowed to do so” because he was irate that I was leaving - as urgent as moving out of unsafe environments is, it is much more important do so only when it is safe, at the right time

Editor’s Note from Break the Cycle

Leaving is a dangerous time for survivors of violence. If you are able, take time to safety plan with someone you trust before leaving.  Remember, you are not alone. Talk with your local domestic violence coalition to find local resources near you such as shelters or legal services. If you are in the DMV area, Break the Cycle provides free legal services to young people experiencing abuse. We can help you obtain protection orders, divorce, child custody cases, and more. Anywhere in the country, if you need to talk with someone about your relationship, text “loveis” to 22522 or call 1.866.331.9474. If you need emergency help, apps like Haven from RapidSOS provide more accurate locations to 9-1-1 and allow you to text 9-1-1 if you cannot talk. You can get two years for free with this link.

Jamie* is a contributing member of Let’s Be Real, a national movement by young people for young people about relationships. They grew up in Sofia, Bulgaria and Toronto, Canada. They are in their first year of law school in DC. Jamie enjoys working out, watching movies, and spending time with family and friends. They believe that everyone deserves a healthy relationship.