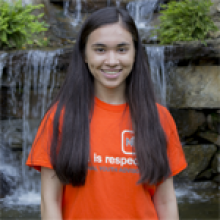 This week's guest blog was written by National Youth Advisory Board member Tatsumi Romano. Tatsumi is seventeen years old and travels between New York City and Los Angeles as an actress. She has been on the board for one year and is a high school student. She uses the arts platform to engage her peers and hopes to help the community understand the difference between healthy and unhealthy relationships.

Imagine you’re standing atop of a five by five pole, forty feet above ground as I did this past summer. You’re harnessed in, with a trained professional down below holding onto the rope. You’re then asked to jump off of the pole. Really try to imagine what it would feel like, forty feet above ground on a unsteady pole, swaying back and forth. The people on the ground are rooting for you, while you’re shaking in fear that something will go wrong. It’s not safe. Those words keep replaying in your head. The people continue to say to “just jump” or “just do it”. Your heart begins to race, and your breaths become shallower. You’re terrified. This is what it feels like to be the victim of domestic violence, sexual assault, or physical/sexual/emotional abuse and to struggle with whether or not you should speak up.

On September 1, 2015, Brooke Beaton, the ex-girlfriend of Teen Mom 2 star Adam Lind, decided to say something. After Beaton was assaulted by one of her former boyfriends, she reached out to friend and photographer Tiffany Sarah Thoelke about doing a shoot to raise awareness about domestic violence. Skipping the planning and hours of makeup that typically go into a shoot, Beaton and Thoelke got together immediately to photograph the fresh bruises. You may focus your attention on the marks, but look into her eyes, as they seem to say, “I know what you did, and I’m not going to keep quiet.”

There you have it. You feel alone and terrified, but fortunately you don’t have to be. With organizations such as Break the Cycle and the National Domestic Violence Hotline, dedicated to assisting survivors and their loved ones find local resources to get help to move forward, there is no longer silence. You can reclaim the support of the people on the ground, by becoming a part of a community and worldwide movement to end the silence associated with violence. You can reclaim your harness with organizations like Break the Cycle, and you can break the silence with a professional who is compassionate and determined. You may wonder what it feels like to have gone through those steps and come out on the other end. In reflection, my mind goes to this: This is what it feels like to be the survivor of domestic violence, sexual assault, or physical/sexual/emotional abuse, and to have spoken up.