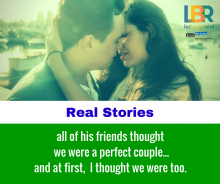 I never could have imagined I would be juggling time between school, counseling, and court dates my junior year in high school. I was only sixteen, and I didn’t even know I had been in an abusive relationship until it had ended.

During health class my freshman year, my teacher went over the Cycle of Abuse and handed out pamphlets with warning signs, and that was that. I remember thinking: “Wow, I’m so glad that I’m fortunate enough and smart enough that I would be able to recognize these signs if it were happening to me.” Though the pamphlets were informative, I did not necessarily fit the victims they had portrayed.  The problem was, I didn’t realize that even though my situation was not exactly what the pamphlets had described, I was still in an abusive relationship. I’m not the only one who has felt this way; other people still don’t recognize abuse, even when it’s happening to them.

During the summer, I started dating a guy I worked with. It was a small town, the kind of place where everybody knows each other, and I thought I knew enough about him to judge whether he was an okay guy or not. He and his family went to church every Sunday, and even volunteered. He was smart, he did well in school and was polite to my family. They approved of him at first. It was my first relationship - I was excited and hopeful. The first couple of months were great. and I couldn’t believe how lucky I was. He would tell me about how all of his friends thought we were a perfect couple, and at first,  I thought we were too.

About three months in the abuse started. He started isolating me from my friends and family; I could only hang out with him. He accused me of cheating on him. He called me nasty things no one should ever be called; he told me I was repulsive and useless. He would push and pull me around whenever he was displeased with me. I felt embarrassed, ashamed, and alone. No one, including myself, really knew how bad the relationship actually was until I finally tried to leave. It was my first relationship; I didn’t understand that this wasn’t just how break ups work. He started stalking me, leaving messages on my phone, verbally harassing me. He tried to corner me when I was alone in the halls at school. When I asked for help, the school told me I could avoid him if need be. I was excused from punishment if he decided to come after me in class. Rather than reprimanding me for leaving class suddenly, the school said they would give me a ‘free pass’ to leave the classroom if he decided to approach me.  Finally, after multiple death threats to me and my loved ones, the court dates began. I received a restraining order against him, which he violated several times.

I thought my experience was uncommon, but sadly, dating violence is frighteningly common and it doesn’t always look how you think it does. 94% of 16-19 year old  victims of intimate partner violence are victimized by their boyfriend or girlfriend(loveisrespect.org).. Domestic abuse does not happen to just adults, I was a young teen when it happened to me. Abuse does not only know female victims either. Sometimes, abuse is not obvious; it includes behaviors that don’t leave visible marks like manipulation, or isolation. It can happen to anyone, and it is important that victims and others understand. Victims should never have to avoid their attacker, or be held accountable for “bringing it upon themselves”, or “making the abuser do it.” Victims are not to be blamed for being emotionally traumatized. Victims should be informed, supported and treated with respect and understanding. Abusers can go to church, and have good grades. They can even be friendly to others or do nice things. Just because the situation does not fit the ‘regular’ domestic abuse profile, does not make it any less abusive.

Abuse is never the victim's fault, and everyone should take  the opportunity to be informed. When we  recognize the seriousness of abuse, we can then take the steps to end it.  Sharing my story through Let’s Be Real is one of the many steps I take to end violence. What are yours?

Elizabeth is a contributing member of Let’s Be Real, a movement by young people for young people about relationships. She is  from Southern Illinois, and a senior in high school. She enjoys running, writing, drawing, and spending time outdoors with her friends and family. Elizabeth believes that everyone deserves a healthy relationship, and that youth and adults should be educated on domestic abuse, so that victims can be heard and supported . She is also a donor to organizations like the National Coalition Against Domestic Violence, and the National Center on Domestic and Sexual Violence. Elizabeth believes in providing resources and comfort for those suffering and who have suffered abuse in any form.