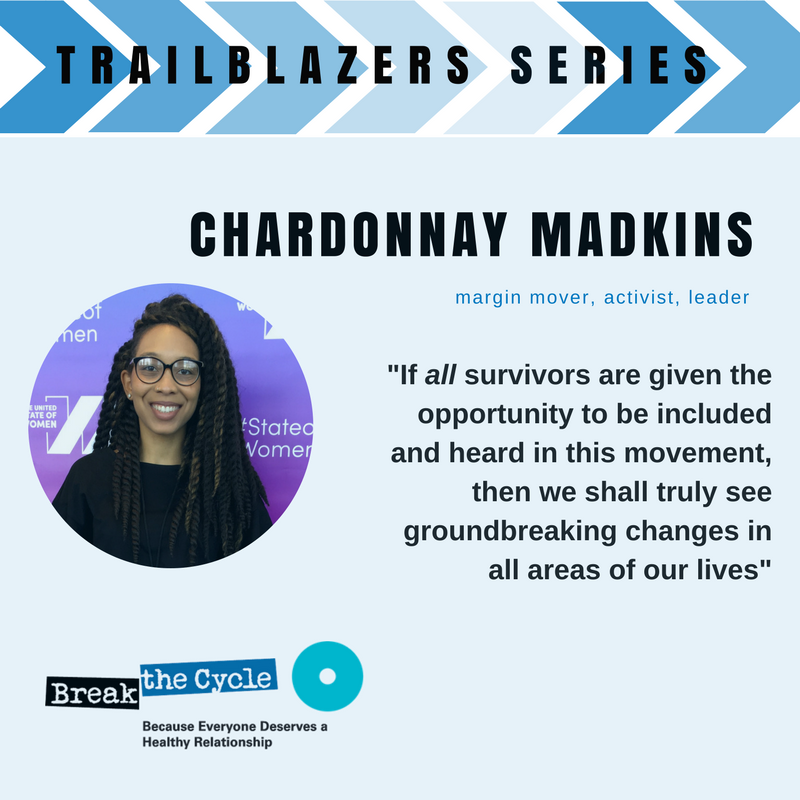 In an age of increased activism on college campuses, one of the people leading the charge is our next TRAILBLAZER, Chardonnay Madkins. Currently working as a Programs and Operations Director at End Rape On Campus (EROC), her roots in the Sexual Violence prevention field go deep. As a Black woman and an activist in college, she co-founded the Oxy Sexual Assault Coalition (OSAC) and worked with both the anti-rape group and the Black Student Alliance cultural club at Occidental College. OSAC’s goal was to bring into the spotlight the issues of survivors of color; they succeeded in mobilizing both students and faculty to demand better handling of sexual assault cases by administrators. After graduating with her BA in Psychology and Urban & Environmental Policy in 2014, she taught English in France for a few years, but didn’t shift her attention from the movement. She fought for justice by using Title IX to challenge historical black colleges and universities (HBCU) to create cultures that were safe for survivors. After working closely with EROC, who supports survivors and their communities while also fighting for police reform and doing prevention work, they invited her on-board. At EROC, she advocates for Black survivors and works to change policies surrounding sexual assault to meet the needs of marginalized survivors by leading the Centering the Margins initiative. While some of the most high-profile figures of the #MeToo movement have been privileged white women, powerful women like Chardonnay challenge us to recognize, reflect, and create a movement that is as intersectional as people’s lives.

Why did you initially get involved with the Gender-Based Violence Movement and what led you to work with young people specifically?

Often times when people ask how I came to doing this work, I reply by stating that I stumbled into it. During my college years I took it upon myself to learn the issues that others faced and pushed to be a leader in which to change a system that didn’t value the life and humanity of the people who were attending their school. I was determined to do more and be more for those who were discriminated against and mistreated; and it is this passion that I have which has allowed me to continue in this long standing fight for equality, justice, and basic human rights.

I was fortunate enough to have been at a college campus during the rise of the new wave of anti violence movement that specifically touched on sexual violence at college campuses. I’ve always had a strong connection and interest in social justice since I was a child — the new wave of anti sexual violence movement as well as the Black Lives Matter movement met my interests while in college and motivated me to get involved in assisting marginalized survivors who are often left out of the overall gender based violence field. Due to my position in a college setting, my initial actions of advocacy began with young survivors. While a sophomore in college, I teamed up with several other students and faculty members and co-founded the Oxy Sexual Assault Coalition, or OSAC as it was commonly known to students. While beginning organizing with OSAC, I began to notice a significant disconnect between OSAC’s anti violence work and the racial equality work that many of the cultural clubs had been doing on campus for years. As our campus actions progressed, I recognized the similar dynamics on other college campuses and in the greater movement where many students of color and Historically Black Colleges and Universities (HBCUs) were being left out of the national conversation around campus sexual assault. I soon took it upon myself to make sure that those who were disproportionately affected by sexual violence were not only included in mainstream messaging, but were given the opportunity to be front and center in the work and overall movement.

Based on your own intersecting identities and experiences, what do you see as some of 1) the greatest accomplishments of the movement so far and 2) the challenges that we still face?

One of the greatest accomplishments I have witnessed so far is the mobilization around the #MeToo Movement. Created by Tarana Burke, a Black woman who has been working to center Black women and girls in anti-violent work, #MeToo has become a tremendous rallying cry for survivors everywhere and is recognized globally. It’s great seeing marginalized survivors finally be given the opportunity to have their voices heard, lead movements they have been pioneers of for centuries, and centered in this work. I’m also exceptionally glad to see that #MeToo has sparked a domino response, expanding to tons of other industries to assist marginalized survivors such as undocumented workers, restaurant employees, and farmers.

Although we’ve witnessed these great strides, there’s still many challenges of the co-opting of our movement, which negatively affects the integrity and true purpose of the work. Although #MeToo has gained much recognition it is extremely disappointing to see the media continue to change the message and true meaning of the movement. As Tarana Burke mentioned in her response to Cardi B’s criticism of the mainstream media only covering white survivors and ignoring sexual violence when the victim is a video vixen, or sex worker — “SHE IS RIGHT… If you let the mainstream media define who the ‘survivors’ are then we will always hear about famous, white cisgender women. But they don’t own this movement - we do.” In agreement with Burke, I strongly believe that if all survivors are given the opportunity to be included and heard in this movement, then we shall truly see groundbreaking changes in all areas of our lives including education, the workplace, Congress, and much more.

What specific message do you want to send to young people?

Something I often tell young people is that despite a common misconception, you hold a lot of power. You have the power to overturn these systems of oppression and to reshape the way in which we operate as a country and society as a whole. Your voices are necessary in everyone’s future and it’s important that you hone in on that power. Collectively we must center those often erased and most marginalized in our social justice work in order to truly bring liberation to all. You have the influence and power of the people, utilize it to the best of your ability as you continue engaging in social justice for all.

Break the Cycle believes that change starts when young people educate their peers, and that’s evidenced in Chardonnay’s story. Her advocate journey began with on-campus organizing, and from there, her impact on the movement has only grown. Chardonnay’s perspective is crucial for successful cultural change - championing intersectionality and ensuring that marginalized people have a place in the movement should be a non-negotiable for every advocate. For young people looking to follow her footsteps and get involved, check out Let’s Be Real.

Stay tuned for our next TRAILBLAZERS feature and read past features here.