Why is teenDVmonth So Important? 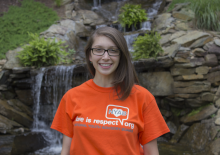 During teenDVmonth, we've asked our National Youth Advisory Board to guest write blogs. This week's youth perspective is brought to you by Nicole De Sario, Executive Team Member.

As you may know, the National Youth Advisory Board for loveisrespect consists of 24 youth aged 14-24 from all over the country. I asked the members to explain why teen dating violence awareness month is so important to them, and to this movement. Some of their thoughts are included below:

“Dating violence can happen to anyone. I am a NYAB member and a social worker but I still found myself in an emotionally abusive relationship that eventually turned into a physically abusive relationship. He spat in my face, put tacks in my pillows and attempted to run me over when I was trying to get out of the relationship. Victims often cannot just leave their abuser; it is sometimes a very complicated and dangerous situation.”

Many board members, like Stephanie, have a very personal connection to this issue. teenDVmonth is a very special time to bring wide spread attention to this prevalent issue. Raising awareness increases the likelihood that individuals will recognize unhealthy situations and seek help.

“teenDVMonth is important to me because it's an opportunity for the voices of young people to be heard and to work as a community to combat a prevalent issue facing teens. By doing so, we honor the survivors and work to build a culture free from violence.”

Dating violence is an issue year round, but February is our opportunity to bring it to the forefront of national attention. October is widely recognized as Domestic Violence Awareness month, but February allows us to focus on youth, and the specific challenges that arise in incidents of dating violence. Melissa mentioned that it is an opportunity for young people to get involved. Often times young people, particularly those who are victims of abuse will feel silenced. This month we can show youth they are not alone and empower them with the message that everyone has the right to a safe and healthy relationship.

Take a look at what’s going on during February and how you can get involved.

Because everyone deserves love.