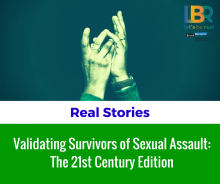 Every 98 seconds, someone in America is sexually assaulted.1 Despite this, only 6 out of every 1,000 perpetrators of sexual violence will ever be incarcerated.2 How then, when 994 of every 1,000 perpetrators of sexual violence walk free,3 can we possibly attempt to fulfill the needs for validation, resources, and hope that survivors deserve? I’ve always been a firm believer that we as everyday citizens can all be champions for survivors who have experienced trauma, but the question of how to effectively become a source of support and validation for survivors is common and should be talked about.

Last month, I asked someone close to me (let’s call him Joe) what he thought of how we as everyday citizens can attempt to fulfill the needs of survivors: “How do you think you could meet the needs of someone who has experienced sexual assault or sexual violence in a relationship?” My question was quickly brushed off with an “I don’t know; I’m not a therapist!” Though there was a hint of sarcasm in his voice, I truly believe he was answering to the best of his ability at that given moment. I then realized that if he didn’t have any ideas, there must be other people with similar questions about how to respond as well.

There is no “right answer” for how to correctly go about validating the experiences of survivors. However, the legal process isn’t for everyone, and many survivors may choose not to proceed with pressing charges (or may not have the opportunity to). In a time where social media and real-time news updates are prevalent, it’s common to hear news stories about people coming forward about their trauma publicly, and typically this comes with some sort of legal proceeding. However, the stories we hear about on the news are only a tiny percentage of the cases of assault that actually occur. A great number of people choose a different path for healing, which is where us everyday people can step up and assist in a way that’s less complex than what you might believe.

It ultimately boils down to compassion. Just sitting down and listening to a survivor for an hour or two about their thoughts, feelings, and needs can make an immense difference. Being heard and genuinely listened to - not just so you can think about what to say next, but for the pure desire of wanting to give the survivor a space to process their feelings and experiences - can be the first step towards healing for many survivors. During these times of validation, it’s important not to minimize a survivor’s experience. Often in an attempt to “stay positive” or reduce discomfort a listener may be having, one may say “it could have been worse” or “be grateful it wasn’t X or Y”. This is extremely invalidating and can have seriously detrimental effects on a survivor’s self-esteem and healing process. Any kind of unwanted sexual contact is a problem, and saying something “could have been worse” is degrading and invalidating to the survivor’s experience and feelings.

The second need we can fulfill is the survivor’s need for resources. I believe the best way for handling this is to direct survivors toward organizations such as Break the Cycle, the National Domestic Violence Hotline or RAINN, which are trained and better equipped to assist with connecting survivors to professionals in their area and can answer questions they may have. You don’t have to have all the answers or “be a therapist” to make a difference. Simply referring someone to an organization can help survivors begin their process of healing, and demonstrate your care and compassion for them.

Finally comes the task of offering hope. Though intangible, hope can be one of the most powerful feelings that you can offer someone. Hope instills the possibility, regardless of how big or small, that things could one day get better. It enforces the idea that healing is possible. Hope gives survivors an idea of what’s possible, driving them toward a path of reflection and healing. Giving hope can be done through simple acts, such as spending quality time with a survivor or making them a favorite food, all the way to connecting them to a support group or even sharing your personal story with them. Regardless, care, compassion, and unconditional love can be healing in itself. Trusting that someone will respect every part of you is a big step, as well as an experience every survivor deserves to have.

With all of this, it’s possible for everyday people to be champions for survivors in their communities. A compassionate stance is a powerful stance, and all of us have the capability to come from a place of care. Just because 994 of every 1,000 perpetrators of sexual violence will walk free doesn’t mean that those 994+ survivors aren’t able to reclaim their power and lives. Whichever path a survivor chooses to take towards healing, remember to ask yourself the following questions: Am I validating their feelings and experiences? Do I know of a few resources I can connect them to? Finally, am I serving as a source of hope through compassion and love?

Tatsumi Romano is a member of Let’s Be Real, a national movement by young people for young people about relationships. She joins Break the Cycle's new movement after being a National Youth Advisory Board member for loveisrespect, a project between Break the Cycle and the National Domestic Violence Hotline. A student at Penn State University, she is majoring in psychology and divides her time working in film and television between New York, Los Angeles, and Atlanta.