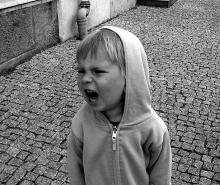 Everybody gets angry from time to time. Traffic is a nightmare, your favorite sport team loses their championship game, your new shirt was ruined in the laundry -- the list of common grievances like delayed flights and having a waiter bring the wrong dinner goes on and on. Yet when someone acts angry for no reason, or explodes in anger, that could be cause for alarm, because extreme or explosive tempers are one of the warning signs of dating abuse.

An explosive temper can be used to control a dating partner’s behavior. Someone may change their own behavior so as not to anger or upset their dating partner, doing whatever it takes to avoid making them angry. This could include changing the way they dress or talk, cancelling plans, stopping activities they like or isolating themselves from family and friends. Moreover, the partner with a temper may rationalize their anger so that it seems normal, even though it’s not.

It may not seem like a big deal at first to a dating partner. They may make excuses like, “they just get angry” or “they just have a bad temper.” However, that bad temper is serious cause for concern. That’s because that anger can escalate into other abusive behaviors like emotional and/or physical violence. They may exhibit other abusive dating behaviors, such as blaming their partner or claiming they provoked them, throwing household objects, kicking, punching, biting, or brandishing a weapon.

If you or someone you know is experiencing dating violence due to a partner with an explosive temper, , text “loveis” to 22522 or talk to one of our trained peer advocates 24/7. Remember, everyone deserves a healthy relationship.