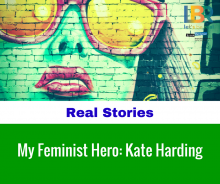 Feminism: the theory of the political, economic, and social equality of the sexes

Intersectionality: the oppression and discrimination resulting from the overlap of an individual’s various social identities, such as race, class, ethnicity, gender identity, etc.

Since I grew up with feminism as part of my socialization, it was a concept I always thought I  understood well. It wasn’t until the summer after my freshman year of college that feminism became a defining portion of my life. Sure, I would read articles about the theory on Facebook, nod, and ask myself why people didn’t seem to get it...but at that point, I didn’t understand the history that feminism has and how complex its effects are in the world. At that point, I wasn’t thinking about the intersectionality that feminism needs in order to be true feminism. Until I needed feminism personally, I held the mindset of a privileged white feminist, who didn’t understand how very important it is for people in general, but especially for women.

The summer after my freshman year of college I was sexually assaulted at a party. The story is like so many others, so I don’t feel the need to get into details, but my assault awoke my inner feminist, a side that I had not previously tapped into. Part of that awakening came from reading the book, Asking For It, written by Kate Harding. This book fearlessly and sharply points out the blatant examples of rape culture that exist in the United States. It addresses the lack of support given to survivors in their communities, as well as ways we can work to change this and the multiple other issues survivors face in our society.

Reading this book only months after my assault was extremely hard. At times, I had to step away from the book for my own self-care, but in its pages I learned so much. It taught me that it is safe, valid and acceptable to address gender issues in a no-nonsense way. It helped me realize that the circumstances that have severe impact on survivors, like reporting and your reputation, often have little consequences for assailants. That is because society’s response to sexual assault is affected by gender, race, sexual history and more. For example, women of color are often stereotypically over-sexualized, so when survivors of color report their assault, some people are not supportive because they think they “brought it on themselves” with their sexuality. Young men are seen as sexually insatiable, so often when a guy reports sexual assault, his “masculinity” is questioned and his experience is brushed off as something he should have enjoyed. Seeing these examples for myself and reading them on the pages in Asking For It, I began to understand the role of intersectionality in feminism. The lesson that every situation in life is changed by the intersection of identities is applicable not only to sexual assault, but everyday life too. Knowing this, my eyes were opened to the other feminist inspirations around me: my mom and dad; my grandmother, who was the first woman to take elevated math classes in Jersey City; my strong and inspirational friends; my brothers and sisters who are also survivors of sexual assault;  former President Obama and former Vice President Biden; Beyonce; Samantha Bee; ; bell hooks; Hillary Rodham Clinton; Chimamanda Adichie; U.S. Senator Claire McCaskill; Ida B. Wells; Gloria Steinem; Dorothy Pitman-Hughes; and hundreds more.

I always believed in the concept of feminism, but I was blinded to the fact that I actually needed it until it became personal. Feminism benefits everyone in different ways, whether or not you see it, and the idea that someone doesn’t need feminism is based in privilege. As a white, heterosexual, cisgender woman, I need to learn to check my privilege and open myself to learn about experiences I will never have. My assault shed a light on why I needed feminism, and Harding’s book taught me why others need it too. I feel as though this lesson is so important, and isn’t discussed as much as it should be. It is a lesson that I am constantly learning.

Now more than ever we, as a nation, need to truly understand feminism. When we leave people of color, men, the LGBTQ* community, or anyone else out of the feminist narrative, it is no longer feminism. Now is the time for us all to be allies. Kate Harding helped me to start understanding this, opening my mind to so many new ideas, which is why she is my feminist hero.

This blog was contributed by Brigid Burke, a Let's Be Real member, former Break the Cycle intern, and current student. She also wrote our post on Women's History Month.