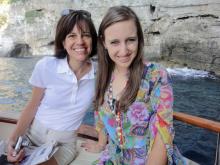 Joanne Caruso is a former Break the Cycle board member with two daughters. While dating violence isn’t something she has personally experienced, she felt as a parent it was an issue near and dear to her heart. So when her daughter, Christine Zaccaro, was looking for a community service opportunity, Joanne encouraged her to volunteer with Break the Cycle. Christine helped out by working after-school in our offices.

Now, Christine attends Boston College and dances with Synergy, a hip hop dance company that performs and competes at various venues across Boston and the East Coast. Each of Boston College’s dance teams participated in Showdown, one of the school’s biggest events of the year, and chose a charity they're dancing for. Synergy won the competition, and donated its prize money to Break the Cycle.

"I chose Break the Cycle because what I did with Break the Cycle was really empowering," said Christine. "Sometimes we get so wrapped up in work and school that we don't realize this is an issue on our campus too."

Not only did Break the Cycle help Christine ignite a passion to end dating violence, but Break the Cycle also helped her avoid a potentially abusive relationship. In high school, Christine noticed a boyfriend of her’s acted strangely. "He was checking my phone and getting upset about little things I was doing," said Christine. "I thought it was my fault and I was doing something wrong, but then I realized, no, this is not real life." After reviewing the warning signs of dating abuse on Break the Cycle’s website, she recognized eight out of the ten signs, and broke up with him.

So what kind of advice can this mother and daughter duo give to peers and parents alike? For Joanne, it’s about being aware and open to the possible warning signs of abusive behaviors. "I think sometimes it's just a hard issue to really think something's going on with your child with this," she said. "You think it's different with your kid. Keep yourself open to the signs, especially if the person your kid is dating is someone you like that you may not want to think is capable of being abusive.”

She also recommends that parents go through the Break the Cycle website, or research dating violence, and show those websites to their kids. "Dating issues and relationships aren't easy to talk about, but just going through the website was a really great thing because my kids could do it on their own time and ask questions if they wanted to." Although dating abuse is a tough topic to bring up, she feels giving her kids the tools to find out more gave them the ability to learn about the issue.

For college students, Christine reiterates it’s never the fault of the person experiencing abuse. "Victims tend to think it's their fault and automatically think they did something wrong and it happened for a reason and they choose to be quiet about it. Talk to someone about it or report the issue and don’t put the blame on yourself because it's not your fault."

Furthermore, Joanne and Christine believe in supporting nonprofits committed to ending dating violence, supporting those experiencing abusive behavior, and educating students about dating abuse and sexual assault. "Every parent has a responsibility to try and educate themselves and their children," said Joanne. "If they can do more, they should."