#MeToo - A Call to Bystanders 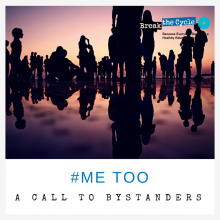 Me too. Two simple words now have a larger meaning. They represent empathy and solidarity; cries of pain coupled with resilience; the experiences of so many.

You’ve read and seen the endless stories on your timelines. You are shocked and appalled. Or perhaps, just appalled, because the epidemic of sexual violence doesn’t shock you anymore. It happens every day, integrated into the fabric of our lives. To women across the globe. To men and non-binary people too. This harassment and assault is rooted in power and control – not sex. And that abuse of power is, unfortunately, normal.

I write this for anyone who wants to change this “normal” - and especially for men. For men who aren’t sure if intervening will really make a difference; for men who do stand up for others and wonder if their actions are enough; and for men who want to redefine what masculinity looks like, but aren’t quite sure how. I want to affirm that intervening does make a difference, your actions can be the first step towards “enough,” and I can help show you how.

When I was in high school, I went to a bonfire with new friends. There, a popular guy I had known in passing since grade school asked me to give him a hug. I refused; I didn’t feel any desire to be in close contact with him. He asked again and again and again. In the context of my situation, a high school student navigating peer relationships and status, I felt I had no choice but to reluctantly give in. Instead of a hug, he reached down and grabbed my vagina, firmly and deliberately. I jumped back shouting something like “What are you doing? How dare you.” My reaction was visceral; I felt embarrassed, furious, and violated. He had no right to touch me. He had no reason to. This experience is important, but what happened immediately afterward is just as important. After hearing my yell, two guys came to my aid. They looked at my face and saw the blatant feelings of shock, betrayal, and confusion. When I told them what happened and how it was awful, they believed me. Despite their friend’s downplaying and denials, they knew that something very wrong had just occurred. Removing him from my presence, they yelled at him and told him that what he did was messed up. Afterwards, they looked me in the eyes and asked if I was alright. They walked me to my car and texted later to make sure I got home okay and see how I was feeling.

Those guys didn’t know me well. In a society and culture that favors silence, it would have been easy for them to turn their heads, blame his actions on the alcohol, or tell me it was just a joke and I was overreacting. But they didn’t. They believed me. They were active and intervened. At least in that one instance, they made a difference. Their actions show that even in dark situations, there are good people – and good men – that can and will step up. And that these stories of Me Too can happen less or at least have a glimmer of hope in them - hope that one day this will not be our normal.

I want to share that spirit of action with you. Here are a few things you can do when you see and hear of these situations:

1. Speak up. Detail what is wrong about the person’s actions and why; challenge your friend’s and your own views of what it means to be a “real man;” when you hear conversations suggesting someone is asking for it, not desirable enough to be assaulted, or any demeaning language, take the time to call out their language.

2. Create a roadblock. Remove the abuser from the victim, create a distraction, or physically stand in-between.

3. Be attentive. Believe the victim; look in their eyes and really listen; ask them what they need to feel safe.

4. Get active. Research sexual violence, abuse and power, and then volunteer with an organization that is working to stop it. Since you’re already here, start with Break the Cycle.

When we all make a conscious decision to practice these behaviors and say No More to sexual harassment, assault, and abuse of power, we WILL change attitudes, hearts, and minds. Collectively, these efforts - our actions - will result in a safer, more peaceful world.

Men, you can make a difference. I look forward to what you do once you say “I Will.”

This story was contributed by an anonymous Love Is Not Abuse member. Join the coalition: breakthecycle.org/loveisnotabuse.