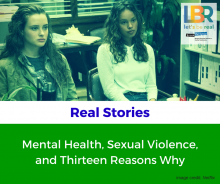 Thirteen Reasons Why has become a popular topic recently, as the Netflix adaptation of the novel written by Jay Asher fills our social media feeds, television watch lists, and conversations. Because May is Mental Health Awareness Month, it is important to discuss how mental health and sexual violence play a prominent role in the show. If you haven’t watched the show, there are SPOILERS below.

As the show begins, we discover that Hannah Baker, a high school girl, has taken her life and left behind a series of tapes, one dedicated to each person that she feels contributed a reason to why she made that decision. The show’s suspense keeps us on the edge of our seats, as we anxiously wait for Clay, the main character and Hannah’s friend, to finish listening to all of Hannah's tapes. The show’s life-like high school drama pulls us in and makes us want to watch as we see each character approach similar high school challenges, like making friends and going to social events. However, the similarities don’t stop there. The audience slowly discovers along with Clay, the awful things that each character has experienced, and the choices they’ve made. Thirteen Reasons Why sheds a harsh light on the reality of teenage life, and it brings forward topics that desperately need to be discussed like mental health and sexual assault.

Each tape holds the details of a series of events that take place throughout Hannah’s sophomore and junior years in high school. These events play a major role in her continuous battle with mental health. The first tape deals with first dates and sexual harassment. When moving to a new school at the beginning of her sophomore year, Hannah encounters a boy named Justin, who charms her and asks her out. After their first date, Justin’s friend takes his phone and sends the whole school an upskirt photo of Hannah going down the slide at the playground they had hung out at (taken out of context to look inappropriate). This act triggers a series of events that causes Hannah to feel isolated and seems to become severely depressed. As the tapes progress, we see a series of additional events of escalating sexual violence, from the upskirt photo, to objectification, and even to stalking. We watch the consequences of this violence escalate as Hannah is repeatedly groped, called derogatory names like ‘slut’ and ‘whore’, and loses her friends due to petty rumors about her sexual history. After witnessing the rape of one of her former friends, Jessica, Hannah is then raped herself. Every victim of sexual violence has a different experience, and each of those experiences is valid. There is no “right” way to be a survivor of violence, and everyone recovers and moves on in their own way. In the show, we see this in the aftermath of each girl’s rape. Unfortunately, Jessica didn’t even know she had been raped until Hannah relays the story on the tapes. When Jessica questions her boyfriend about the events, he lies by telling her that the rape never happened. We see Jessica hang out with her rapist; we may assume reasons why she does this, like not wanting to believe that the rape happened or trying to make peace with the person who she suspects assaulted her, but we never hear why directly from her; we only know it's part of her journey. Jessica becomes increasingly immersed in the party scene by abusing alcohol and skipping school as coping mechanisms. This is common for many survivors; one study found that sexual assault survivors experience an increased risk of substance abuse.1

While Jessica turns to partying afterwards, we see Hannah do the opposite. The same study mentioned above also found that sexual assault survivors experience an increased risk of posttraumatic stress disorder and depression, which could be what Hannah experiences. She withdraws, as she feels guilty and ashamed about her experiences with sexual violence over the past year.  Sadly, many victims of sexual assault feel blame for the crimes committed against them. Of the sexual violence crimes not reported to police from 2005-2010, 20% of victims chose not to report because they feared retaliation2. The effects of the violence that Hannah had gone through in the last year that had been slowly building up, suddenly crashes down, and she is too overwhelmed to handle it on her own. We watch as Hannah seeks help by talking to the guidance counselor at her school. After he essentially tells her that nothing can be done about the assault, Hannah is left even more devastated than before since she is not able to find any support or help from the guidance counselor's response. Hannah and Jessica’s situations seem shockingly uncommon, but they are not. Almost 60% of teenagers report experiencing some form of sexual harassment in a given year, according to a survey by the American Association of University Women3 and 82% of all juvenile victims of sexual assault are female.5 Sexual assault and sexual violence are not always easy topics to discuss, but that doesn’t mean these conversations should be avoided. Hannah had repeatedly been sexually harassed, and felt like she had no one to talk to about it; when she was raped and she asked for help, she did not receive any. This is why it is extremely important for other people to know how to talk with survivors, and be able to help refer them to additional help they may need. Sexual assault deeply affects the mental health of victims, and this reality should not be ignored or downplayed. According to RAINN, 33% of women who are raped contemplate suicide and 13% of women who are raped attempt suicide.4 These events affected the two girls mentally and emotionally, and they needed help to heal and process.  At the end of the show, we see Jessica tell her father about her rape, and can assume she will get help. Hannah felt as though she couldn’t get help and as a result, felt further isolated. Tragically, a lot of victims feel helpless, which is why it is all the more important that we help them find hope, and get the help and support that they need. There is help, and it can be found in a trusted adult, a close friend, and even some hotlines, like the National Sexual Assault Hotline (1-800-656-4673), or the National Suicide Prevention Lifeline (1-800-273-8255). What happened to Hannah and Jessica was not okay, and talking with someone about sexual assault and the mental health issues that follow can save lives.

Throughout the show, each character is involved in horrific occurrences, like assault. It is so important that we realize the effects that these occurrences can have on our mental health. Jessica and Hannah’s stories are devastating and real for many young people. High school students go through so much more than adults realize, and often times our problems are overlooked. Some people, like the characters on the show, assume that it's ‘normal,’ because so many go through the bullying and the harassment, and they feel like they have no one to talk to. Thirteen Reasons Why has brought a lot of attention to what these tragic events look and feel like, and that it is crucial that we start talking about these issues with our friends, schools, and families.

Elizabeth is a contributing member of Let’s Be Real, a movement by young people for young people about relationships. She is from Southern Illinois and a senior in high school. She enjoys running, writing, drawing, and spending time outdoors with her friends and family. Elizabeth believes that everyone deserves a healthy relationship, and that youth and adults should be educated on domestic abuse so that victims can be heard and supported. She is also a donor to organizations like the National Coalition Against Domestic Violence, and the National Center on Domestic and Sexual Violence. Elizabeth believes in providing resources and comfort for those suffering and who have suffered abuse in any form.