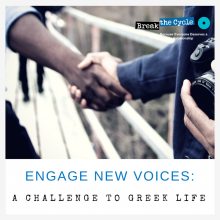 April is nearly over, and as we reflect on Sexual Assault Awareness Month, think of ways that you can continue this conversation throughout the year. Many of you have heard the statistics of women who will be sexually assaulted in their lifetime and on college campuses; those statistics are alarming, to say the least. As a former undergraduate student at Michigan State University and a member of Kappa Alpha Psi, I am calling ALL fraternities to step up to prevent sexual violence on our college campuses. I often look back on my college days, and think about the good times I had meeting new people, making new friends, and eventually joining a fraternity. Yes, I had many joyous moments, but I feel as if I could have created a bigger impact on our campus. If I were on campus today, the main opportunity I wouldn’t want to miss having my voice heard on is sexual violence on college campuses and the role Greek life and men have to play in it. Many - though not all - sexual assaults on college campuses are perpetrated by men. Society often thinks of sexual violence as a women’s issue, but in reality, we need to engage new voices in the movement to end sexual violence. More needs to be done to bring awareness to and teach young people, especially young men, about sexual violence. College leaders involved in Greek life, take a step of action: help spread awareness about the issues happening with your peers and stop sexual violence on our college campuses. Fraternities and Sororities were built on values such as brotherhood and sisterhood, as well helping foster a better community. What better way to do that than to collaborate with each other to help create awareness and prevention programs? Though changing, many programs used for sexual violence prevention with young people, are catered to what a victim can do to prevent an attack with little to no focus on the perpetrator. Why aren’t our Greek leaders helping to educate their peers and even mentoring younger boys to not be perpetrators of sexual violence? I often hear a female victim of sexual violence referred to as someone's mother, sister, daughter, etc. While this is true, above all she is a human and should be treated as such, regardless of her relation to you. Fraternities should be taking the lead to educate each other and the other young men on campus about sexual violence and what it means to have healthy relationships with yourself and others. It is time for men to step up and fight for an issue that is running rampant around the U.S. and affects so many women (and men) on our college campuses. You can start with small steps: like bringing the Let's Be Real movement to your school and having conversations with each other about sex, consent, and what you should do when a friend is crossing the line, taking the It’s On Us pledge, or hosting a screening of films around the issue like Audrie & Daisy or The Hunting Ground.

Please Greek community: stand together and use your leadership positions to foster a better community for the future. You don't want to sit back years later wondering how you could have created a larger impact while holding a position of power for such an important issue.

This blog was contributed by Evan Williams. Evan has been a member of Kappa Alpha Psi Fraternity Inc. via Michigan State University since 2010. He is currently working in his field of passion: education, as an Academic Advisor for Doctoral Students within the Rossier School of Education at the University of Southern California.