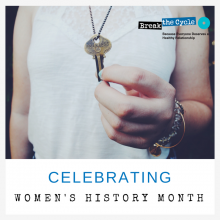 What is the purpose of National Women’s History Month? It was implemented because the narrative of women and the culture and history they have built in the United States is so often left out of what we teach. Our government recognizes Black History Month (February), Women’s History Month (March), Hispanic-Latino Heritage Month (September 15-October 15), National American Indian Heritage Month (November), and more, because they are not a part of our mainstream education. And many of these months aren’t recognized as much as they should be in schools. The majority of our education system in the United States teaches a very white-washed version of history. Not to say that isn’t history, but it definitely isn’t all of it. We recognize these months to pay tribute to the history and culture these groups have added to enrich the United States. We recognize Women’s History Month to teach what women have done, and to help inspire women to fulfill their true potential. Women were at the forefront of the gender-based violence, domestic violence, and sexual violence prevention movements, and continue to lead the way to a world without violence. Break the Cycle featured a few of those incredible women in their TRAILBLAZERS series about the activists that began and continue the movements, highlighting how their identities influence their work. Women make up about 51% of the population in the United States so when women succeed, we all succeed.

This year, grants provided by the Violence Against Women Act are on the 2017 budget's chopping block. These grants work to prevent, intervene, and rehabilitate those affected by domestic violence, dating abuse, sexual assault and stalking - especially in LGBTQ*, Native, and rural communities. Which is why this year’s Women’s History Month is so important. We need to unite as women from all backgrounds and identities - to raise our voices to Congress, to our local councils, in our schools, communities, and with our friends - to say “No More!” We will NOT allow this to happen and we will NOT be silent. This month and every month we need to teach all young people - especially young girls - about the rich history that women have played in America, so we can inspire them to dream about the history that THEY can change in the future. In the meantime, I will be on my college campus making my own piece of history; I invite you to join me by creating change in your area with Let’s Be Real, a national movement by young people for young people about relationships. Let's make the women who came before us proud.

This blog was contributed by Brigid Burke, a Let's Be Real member, former Break the Cycle intern, and current student.