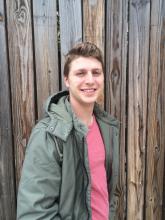 In honor of Sexual Assault Awareness Month, during the month of April we will be featuring our partners across the nation in a Guest Blog Series on issues of sexual violence. Please be aware that this blog post references incidences of sexual violence, and may be triggering to some readers. This week's post comes from Richard Martin at Men Can Stop Rape.

Oklahoma SAEs on video chanting racial slurs. Kappa Delta Rho at Penn State posting photos of nude, unconscious women to a private Facebook group. Decked out in oversized basketball jerseys, baggy jeans and drinking out of watermelon cups, Tau Kappa Epsilon at Arizona State University hosts an ill-advised MLK Day theme party. It seems like every week, some fraternity chapter is involved in a scandal, not to mention the troubling incidents of hazing, sexual assault and drug abuse associated with fraternities.

So why even try to make fraternities a part of the solution? Why not just dissolve them completely?

When I tell people that I work for Men Can Stop Rape, I often get responses of praise or respect. This quickly turns to looks of disbelief when I mention that my work mostly focuses on social fraternities, as I was a “frat guy” myself in college.

Of course there are fraternity men who commit sexual assault. That much is obvious. However, like pretty much any all-male group, perpetrators are the minority. Most fraternity men will never commit rape, but they might be unclear on the rules of consent or might feel uncomfortable standing up as a lone voice against sexist behaviors within their culture. When interacting with fraternity men, I have found that most of them are quite attuned to what is happening on their campuses related to sexual assault, but are confused as to how they can stop it. They have real questions on how they can keep themselves and their peers safe, but also how they can do so without being labeled a “buzzkill.”

Fraternities also have an incredible amount of influence on college campuses and worldwide. Most fraternity members are student leaders, and many have gone on to become CEOs, presidents, prominent athletes and entertainers. By influencing these men to incorporate sexual assault prevention and healthy masculinity practices in their own lives, the hope is that they will in turn have a hand in making these ideas become the dominant story of masculinity in our society.

On a recent trip to High Point University, just outside of Greensboro, North Carolina, my colleague Adrian Valdivia, Manager of National Programs at MCSR, and I held a workshop for fraternity leadership from all Greek chapters, as well as the men’s basketball team, on how to prevent sexual assault in a hook-up culture. In this presentation, we often challenges the ideals that society tells us constitute “real men,” expel the onus of rape prevention being the responsibility of victims and help create a foundation of understanding and compassion that these men can take with them as they further themselves emotionally, physically and academically.

For me, to see the breakthrough to young men as they hope to change a culture that has for many years been problematic is worth all the jet lag. I saw this when I met with fraternity leaders and heard them open up about their past experiences.They wrestled with the burden that women face on stopping rape. They acknowledged their privilege in that situation and saw that they could stop it as well. At the end of the training, I had fraternity men and college athletes come up to me and say, “I’ve never really thought about these things before. I’ve never really considered that these issues affect women like my mother or sister,” or, “I felt like you were speaking with me, not just at me.” What these men appreciate most is that we give them a safe space, free of judgement to discuss these issues. We give them that opportunity to become the man who is a successful bystander or who is simply able to tell his friends when they are being inappropriate.

Overall, my time in college and in a fraternity was a positive experience. It wasn’t about how crazy the parties could be, but about being there for Alex when his father passed away, or helping Adam plan for his marriage proposal, or raising money to support philanthropic endeavors like Alzheimer’s research and children’s hospitals. These are the types of interactions and relationships between men that I hope to promote to campuses nationwide.

Here some tips to help challenge the traditional fraternity mentality:

​For more information on Men Can Stop Rape, please visit their website. To contact RJ, you can reach him at his email: [email protected].