Aziz Ansari, and many other men 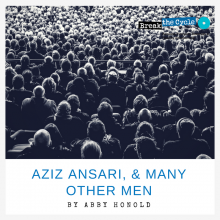 This blog post is originally from abbyhonold.com and all rights are reserved to the author. Abby is a rape survivor/thriver + sexual assault advocate. Her work includes fighting for a bill to expand the use of trauma-informed techniques in responding to sexual assault. Thank you for allowing us to repost.

I know I’m not the only woman who’s been reliving unpleasant memories ever since Babe’s story about Aziz Ansari [trigger warning - sexual assault for that link] surfaced. At first, I honestly just felt shocked at the level of detail. I was having flashbacks to being raped because of the sexual descriptions in the article. I wasn’t the only one; the support group I started was overrun with pending posts about the article and how upsetting it was to read.

Next, the comments started overwhelming my feed on nearly every form of social media. “This is stupid”. “She could’ve just left”. “This is disrespectful to REAL victims of sexual assault”. “She should’ve said ‘no’ more”. “What was he gonna do, hit her?”

Uh yeah, actually, maybe. My mind immediately flashed back to an incident where I had given a firm “no” when a male friend told me he wanted to have sex with me and promptly got a black eye. I thought about the boyfriend when I was young who had grabbed me by the hair and tried to force me to give him a blowjob. I thought of a boyfriend who would insist “just give me 5 more minutes” when I would start protesting. I remembered the time I just laid there, frozen, while a guy I had agreed to go on a date with (but didn’t agree for him to bring me back to his house alone) had kissed me and felt around my body; I just closed my eyes and waited for it to be over. I just was hoping that he wouldn’t rape me.

In fact, it’s pointless to try to list all the times I’ve been in this situation. I’ve been in this situation so many times that I remember how shocked I was the first time I dated a guy who actually wanted me to be interested in what we were doing. I remember the first time we were kissing. He had started to progress further, and I flinched – and he just stopped. “Sorry,” he said, “maybe next time.” I was blown away. I remember telling him eventually how crazy it felt to have someone who actually cared whether I was involved in what was happening. And I still remember his response: “thanks, but that’s how everyone should treat you”. It was the first time that I realized that maybe it wasn’t normal to feel like you only have two options: either you have to physically fight your way out of a sexual encounter; or you just sit there, you “let” them take it to a certain point, and you aren’t allowed to feel bad about it. Maybe, just maybe, there were guys out there who cared about whether I wanted to participate or not.

So I started exploring that. In fact, I learned that I could actually insist on it. I started paying attention to how men I went on dates with acted at the end. Did they lurch forward at the end of the date with unfocused eyes and try to hurl a tongue down my throat? Disqualified. I still struggled with being rude in the moment. I was scared of being insulted, physically hurt, or worse. But I was finally paying attention. I still encountered uncomfortable, non-consensual situations like this along the way, but I was starting to validate for myself that these men were actively choosing to ignore me when I tried to speak up. That’s not how physical touch had to be. I married a man who loved me. Like, actually loved me, respected me, and cared about my boundaries. It was incredible and still is. Then I read Grace’s story this week. My initial instinct while reading was that I was becoming upset, but that this was just “bad sex”. I thought to myself that I should give Ansari the benefit of the doubt. But I kept reading. And then I read it again. I took note of every time that she mentioned that she had expressed discomfort. I took note of how often he ignored her. And I realized that I had to publicly put my foot down.

People send me messages frequently about how I am a “real rape victim”. I have scars, he’s in prison, he had many (many) victims, therefore it is “real”. I’ll obviously agree that I was “really” raped. But if that’s where you’re putting your bar for what counts as unacceptable behavior from men, it’s time to talk. Because what Ansari did was wrong, despite the fact that no one is calling for him to go to prison or register as a sex offender. Grace says that she was sexually assaulted. And really, that’s not up for debate by anyone else. Whether or not it meets a legal definition (which most victims never have validated for them), she left the experience feeling upset and traumatized. She describes it in the headline as the “worst night of my life”. Her account very clearly leaves no room for consent. In fact, it doesn’t sound like he ever explicitly asked at all. She verbally protests, she moves away, she freezes and doesn’t know what to do.

I can look back now and say that I know that I would be stronger than I once was if something like that ever happened again. But would I? Our responses aren’t always up to us. Most of us can recognize, for example, that we’re better at giving advice to other people than we are at doing the best thing for ourselves in the moment. Until you’re actually there, in that moment, you have no idea what your response will be. Writing an article about how you “know how to call a cab” isn’t helpful, and you don’t even know if it’s accurate. You weren’t there. The bar for what consensual sex should be is not “she didn’t fight me on it”, “I stopped once she started crying”, or “she was laying pretty still, but it’s not like she told me to stop.” Sex is not a game that you try to win. Consensual sex is not about only one person’s desire. Teach all of this (and more!) to your children (absolutely not just the girls). Push your schools to start education about healthy relationships and consent at a young age. Remember that men are fully capable of understanding the word “no”, and every other polite variation of it, and they should never be treated as if they don’t understand. Every single one of us can play a role here, and it doesn’t have to be a negative one.

When it comes to Ansari specifically, he can choose to do better. He can learn and change. The many men who have sent me questions asking why this behavior would qualify as assault can also learn to change. Because we deserve more. Those of us (while mostly female, but really of any gender) who have experienced that publicly-determined “gray area of consent” deserve to not encounter people who don’t care about what we want. We deserve to have an actual say in whether we’re being touched. We deserve to help create a world where our future children aren’t recreating our mistakes. If you disagree with those statements, I probably can’t help you. But if you read those statements and agreed, even if you don’t know how to help everyone get there, I’m glad you’re on board. Start listening to us.