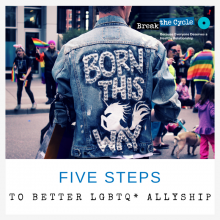 June is an important month at Break the Cycle. June is PRIDE, a month where we celebrate collective movement, connection and power of LGBTQ*1 communities. PRIDE began in 1970—as a way to commemorate the 1969 Stonewall Riots in Greenwich Village, NYC. The police raid that led to the riots at the Stonewall Inn was a symptom of a society that was unwelcoming of LGBTQ* individuals and oppressive on LGBTQ* concerns and issues. When I imagine the first PRIDE marches that took place the year after, I imagine what it was like…the power, the fear, and sense of unity the participants must have felt.

I wonder if the Stonewall Rioters and original marchers ever imagined how PRIDE would look today. There are not only marches in large urban settings, but in many small towns as well. The community and its allies have come together to obtain protections for LGBTQ* survivors in the Violence Against Women Act (VAWA) after years and years of advocacy. Same-sex marriage is now the law of the land. These triumphs should be acknowledged, respected, and celebrated.

And yet, there is still a long way to go in the fight for true equality. When I was growing up in a small town in middle America in the 80’s, you could regularly hear, “that is so gay”…meaning that is so dumb or stupid. Being “out” was not a safe choice. When I think back to our town’s ignorance I am ashamed. One of my best friends in high school was gay, but he was in danger every day in our small town. To survive he had to close off who he truly was. Only as an adult far away from our small town was he able to truly be himself, find his life partner, and have a child. For young people, this reality still exists. When Break the Cycle talks with LGBTQ* youth across the country at our Real Talks, they have told us that the barriers for LGBTQ* individuals and ignorance of LGBTQ* realities are alive and well. Some, although “out,” face humiliation, name calling, and lack of access to a bathroom. The words may have changed since the 80's when I was in high school, but because we have not coupled those words with action, the underlying oppression still lingers. How do we—as individuals or as members of social justice causes—show up to support LGBTQ* youth? How can we be better allies? Start by not just talking the talk, but walking the walk. Here are 5 steps for better LGBTQ* allyship:

Allyship is a journey. You will never reach the end or check it off of your “to-do” list. It is a constant work in progress and a commitment to a state of mind. The first step is keeping your privilege front and center when talking with youth who identify as LGBTQ*. Constantly checking your assumptions is the second. Believing in the power of community to affect change is the third. Speaking up and directly confronting oppression when you see and hear it is the next step. Finally, support in ways that are requested…not because it’s what you think is best. Not sure where to start? Download Break the Cycle’s LGBTQ* Inclusivity tip sheets to assist you your journey. We’re proud to stand with you as youth and LGBTQ* allies.

1As a measure of inclusivity, we use the acronym LGBTQ* to include all sexual orientations, gender identities, and expressions. We understand that identities are not limited to the terms represented by the letters in this acronym and aim to be representative of the entirety of identities across the queer spectrum.